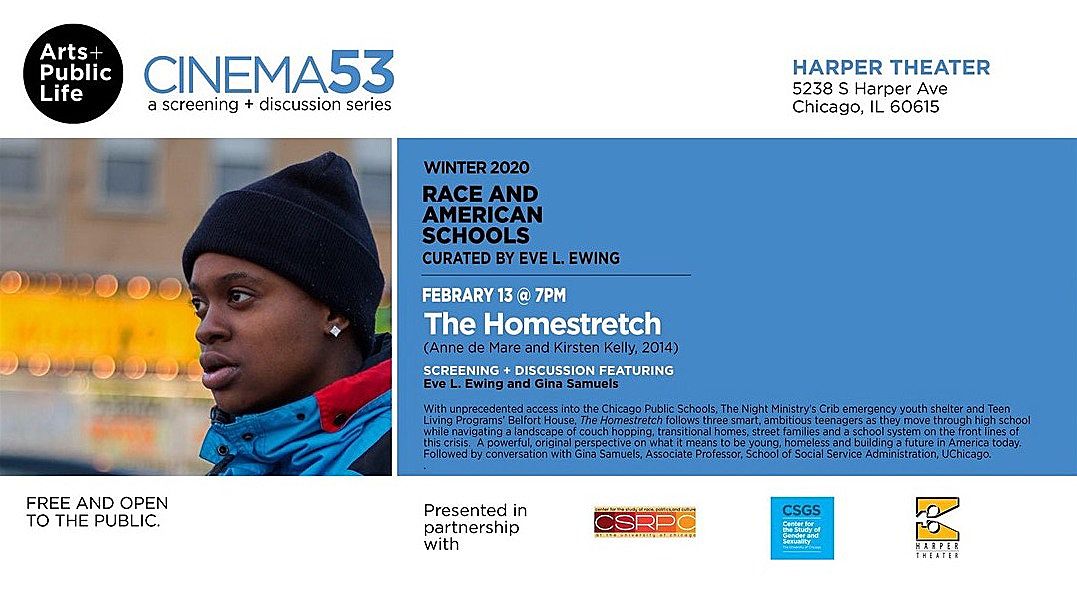 Cinema 53: The Homestretch with Gina Samuels and Eve Ewing

Cinema 53: The Homestretch with Gina Samuels and Eve Ewing

With unprecedented access into the Chicago Public Schools, The Night Ministry’s Crib emergency youth shelter and Teen Living Programs’ Belfort House, THE HOMESTRETCH follows three smart, ambitious teenagers - Roque, Kasey and Anthony - as they move through the milestones of high school while navigating a landscape of couch hopping, emergency shelters, transitional homes, street families and a school system on the front lines of this crisis. The film examines the struggles these youth face in obtaining a high school level education, and then follows them beyond graduation to focus on the crucial transition when the structure of school vanishes and homeless youth struggle to find the support and community they need to survive and be independent. A powerful, original perspective on what it means to be young, homeless and building a future in America today. (Anne de Mare and Kirsten Kelly, 2014, 90 min)

THE HOMESTRETCH is part two of Race and American Schools, Cinema 53's winter screening and discussion series. In this trio of documentaries, Cinema53 explores the central role that race has played in the experience of schooling in America. Is education truly “the great equalizer”? Who is left out of that vision? How can education be used as a tool for liberation-- or oppression? Curated by Eve L. Ewing, assistant professor at the University of Chicago School of Social Service Administration and author of Ghosts in the Schoolyard: Racism and School Closings on Chicago’s South Side, the winter series brings together a researcher, a community organizer, and a filmmaker to unpack the sordid story of race and education, and imagine the future of American schooling.

Gina Miranda Samuels is an Associate Professor at the School of Social Service Administration and a Faculty Affiliate of the Center for the Study of Race, Politics and Culture at UChicago. Her scholarly interests include transracial adoption, mixed race and multiethnic identity formation, interpretive research methods, and the development of relational, kinship, and cultural ties among young adults whose childhoods are shaped by foster care and adoption. Samuels is a Board Affiliate of MAVIN Foundation, a national organization addressing the needs and concerns of multiracial populations and transracial adoptees, and a consulting editor for Child Welfare, Children Youth Services Review, Family Process, Marriage and the Family, Family Relations, and Race and Ethnic Studies. She received her M.S.S.W and Ph.D. in Social Work and Social Welfare at the University of Wisconsin-Madison, where she received a Council on Social Work Education Minority research fellowship funded through the National Institute of Mental Health. She has practiced social work in the areas of child welfare and child protective services, juvenile probation, Afrocentric school-based tutoring programs, and group therapy with female youth.

Admission is free and open to the public. Seating is first-come, first-seated. Doors open at 6:45pm.

Cinema 53 is a screening and discussion series presenting conversation provoking films by and about women and people of color. Housed at the historic Harper Theater in downtown Hyde Park, Cinema 53 brings together scholars, artists, students and audiences from Chicago's South Side and beyond to watch films that reflect, and reflect upon, the social and economic hierarchies that structure our society. We show works across the spectrum of narrative, documentary and experimental, classics and rarities, archival to contemporary. Curated by film scholar Jacqueline Stewart, Cinema 53 invites inclusive, intersectional, intergenerational dialogue that supports the work of artists from historically marginalized groups, and cultivates constructive critical thinking among viewers of all backgrounds.