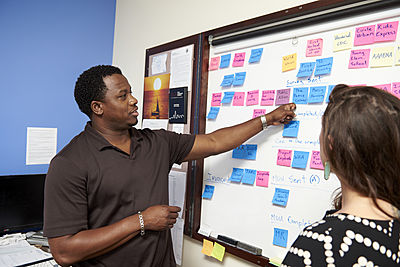 As executive director of Austin Coming Together (ACT), a nonprofit dedicated to improving the West Side neighborhood, Darnell Shields is the conductor for a whirlwind of activity.

In the last few years, ACT started running Austin Career Connect, a program where local jobseekers can be assessed and then enrolled at the appropriate local agency for their employment needs, and began a partnership with the Erickson Institute to operate a local early childhood education program. This summer it began coordinating member organizations, other local institutions, and hundreds of residents to create a quality-of-life plan as a blueprint for Austin’s future, and it operates the neighborhood’s Micro Market Recovery Program to save homes that are vacant due to foreclosure.

To make a difference in Austin, ACT acts as a convener, bringing together residents, leaders,  and organizations inside and outside the community. “At the end of the day, that’s our key resource—relationships. We can’t do this work in a vacuum or in a hurry. It all moves at the speed of trust,” Shields said.

It shouldn’t be surprising, then, to learn that when Shields became a fellow at the University of Chicago’s Civic Leadership Academy, he saw an opportunity to widen his network and bring more resources to bear. “What makes CLA unique, from my perspective, is that it gives both social and technical support to leaders,” he said. “Going to the Civic Leadership Academy was like hitting the lottery in my mind—getting access to so many talented people.”

Shields was director of operations at Austin Coming Together when he was enrolled in the first CLA cohort, in 2015—he became executive director this January. It’s been a busy several years, and that hasn’t changed. The pace of change has hardly slowed down. ACT is in negotiations to buy the building that they now rent as their headquarters, and Shields is responsible for adding staff to the growing organization. Although he says in some ways he’s still learning on the job, Shields must be doing something right: He was presented with the United Way of Metro Chicago’s 2017 Community Leadership Award in June.

Since graduating the academy in 2015, Shields has continued to tap into the expertise of his CLA cohort. James Rudyk, Jr., the executive director of the Northwest Side Housing Center, gave advice and even came to the site visit when ACT was applying for the grant to become a quality-of-life planning site with the Local Initiatives Support Corp. (LISC)—a powerful vote of confidence from a leader whose organization recently finished a LISC community plan of its own. Randall Blakey, executive director of the North Unity Program, was the keynote speaker at ACT’s board retreat, and Shields said that he regularly calls fellows at agencies like the Chicago Park District, Chicago Public Libraries, and the Department of Family Support and Services to learn more about specifics of how their agencies work in Austin.

“Darnell is skilled at leveraging people and resources—it’s good to see in a young executive director. When he doesn’t know something, he has the capacity to find the people who can help,” said Tenisha Jones, who oversees the education department at the Greater Auburn Gresham Development Corp. and another member of the 2015 CLA cohort.

Jones should know: Shields asked her to join the board of directors of ACT after they graduated from CLA, in part because of her keep knowledge of Chicago’s education systems, including how to use data to build best practices. “It’s a win-win—I wanted to develop new skills as a board member and he wanted someone with my skills on his board,” she said.

Joanie Friedman, the executive director of civic leadership at the University of Chicago, said that Shields exemplifies CLA’s goal of connecting alumni. “We’ve designed the academy to create these deep relationships so that emerging civic leaders in Chicago have a continuing network in their work for advice, for support, for collaboration,” she said. “I’m consistently impressed by how well Darnell uses that network.”

Shields says he thinks differently about leadership from his time in CLA, particularly lessons about how a leader manages his or her own behavior and reactions in a situation and ideas about how to hire and manage staff. He’s a resource for his cohort, too. When Darlene Hightower left Public Allies to become the associate vice president for community engagement and practice at Rush University Medical Center, she reached out to him for advice about the landscape and who to talk with on the West Side.

“It’s a two-way street,” Shields said. “Because of CLA we have access to others with different backgrounds and expertise and from different kinds of institutions. That social capital network is a huge asset.”