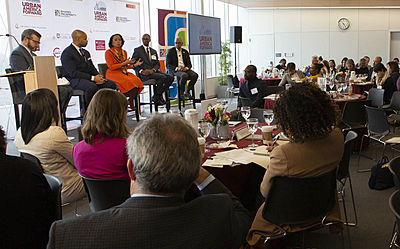 A diverse group of more than 80 city, community development, policy, business, and philanthropic leaders from across the country convened at the University of Chicago Tuesday and Wednesday to explore strategies to improve equity and inclusive growth in urban communities.

Urban America Forward: Equity Solutions in Place, is the third installment of an ongoing initiative by the university to bring together experts from a range of disciplines to address uneven prosperity in urban America.

“Urban America Forward is grounded in the principle that equity is achievable through systems change,” said Alaina Beverly, assistant vice president for Urban Affairs at the University of Chicago. “We are delighted to convene expert practitioner- disrupters who are driving transformative change and expanding economic inclusion in cities across the U.S.”

The two-day gathering kicked off with a panel of experts sharing their success stories, including unanticipated obstacles to advancing prosperity in their respective communities.

Bill Hawthorne, chief equity officer for the City of Atlanta, emphasized the importance of political will to expand opportunity and build assets across geography.

Under its current leadership, the city of Atlanta has dismantled policies that have disproportionately affected communities of color, such as eliminating cash bail and the arrest of people caught with less than one ounce of marijuana.  These actions have reduced the jail population from 1,300 to 60. Today, the city uses the jail as a center for city services.

“We took this big building on Peachtree Street and changed it from a place of incarceration to transformation,” Hawthorne explained.

Eric Robertson, president of Community Lift in Memphis, shared how his city was able to use mini-grants to play a critical role in expanding economic opportunities.   His organization was able to build a valuable database of 300 groups that are committed to centering neighborhoods in Memphis’ economic development.

On the other side of the state, Ashford Hughes, Nashville’s former Chief Diversity, Equity and Inclusion Officer, talked about his city’s efforts to pass an ordinance that ensured that people of color and LGBT citizens have equal access to business opportunities.

Research shows that despite a strong national economy, many Americans have been left behind. The Brookings Institution reports that income among the nation’s wealthiest families have increased about 90 percent between 1963 and 2016 compared to less than 10 percent for the nation’s poorest families.  According to the Urban Institute, a growing share of communities of color are excluded from jobs, education, and other resources essential to moving up the economic ladder.

Helene Gayle, president and CEO of the Chicago Community Trust, explained the city’s long history of discriminatory practices such as redlining – which stripped wealth out of African American and Latinx neighborhoods - is at the root of the racial and ethnic wealth gap in the Chicago region. The Trust is focusing on closing that divide.

“In a city like Chicago – where two-thirds of the population are people of color who don’t have equitable access to economic opportunity, it’s in everyone's best interest to tackle this issue,” she said.

On the second day of the forum, discussions focused on the role of the public and private sectors in inclusive growth, including leveraging federal and state dollars and policy priorities, and inspiring business leaders to change hiring, procurement, and mentorship to reach the most vulnerable populations.

All the participants agreed that if systems change is going to take root in cities strong leadership, collaboration among unlikely allies, and exposing hard truths about inequality are critical to move the needle on equity

“We have to call it like it is,” said Hughes.  “We just can’t sugarcoat it anymore.”

Hughes’ sentiment was echoed by Andre Perry of the Brookings Institution, who urged the group to consider the devastating impact of systemic devaluation of black communities, which has been a constant factor in perpetuating the racial wealth divide in America. His presentation outlined the themes of his upcoming book, Know Your Price, to be released in the Spring of 2020.

The conference ended with participants providing recommendations to city leaders on steps they can take to overcome identified challenges in their communities.

This conference is the third in a series Urban America Forward gatherings hosted by the University of Chicago since 2015. Other partners include the Harris School of Public Policy, the Center for the Study of Race, Politics and Culture, the School of Social Service Administration, the Annie E. Casey Foundation, The Kresge Foundation, the Brookings Metropolitan Policy Program, the Urban Institute and Living Cities.