UChicago scholar inspires students to engage with our environment

Early in the COVID-19 pandemic, University of Chicago scholar Sabina Shaikh and her seven-year-old daughter resolved to get outside every day. They found time to bond before remote school and teaching on Zoom each morning by going to a neighborhood park, which became a perfect place to exercise and explore nature.

Venturing out even in rain and sub-zero windchills, they observed the change of seasons in minute detail: fresh snow in winter; their favorite magnolia and cherry trees budding and blossoming; birdsong rising over the course of spring; a cicada emerging from its exoskeleton; and dozens of migrating monarch butterflies resting on branches in late summer. They even raised some caterpillars of their own and released them.

“Paying attention to and embracing nature in cities is not a new concept by any means, but I think there’s so much more we can do if we’re engaging with the spaces we inhabit,” said Shaikh, an economist and social scientist who studies the environment.

This philosophy is reflected across her work: In addition to directing the Program on the Global Environment, which houses the undergraduate College’s environmental and urban studies major, Shaikh is the faculty director of the Chicago Studies Program and a co-lead of the Mansueto Institute for Urban Innovation’s Environmental Frontiers initiative.

Together, her roles speak to her commitment to getting students engaged—both with the city of Chicago and with sustainability initiatives on campus.

Rethinking the relationship between humans and nature

Shaikh was inspired to study environmental economics by her own undergraduate courses at the University of Wisconsin as well as her upbringing near Milwaukee, where her lifelong fascination with the Great Lakes began. At UChicago, Shaikh seeks to foster student interest in environmental issues in a way that can lead to meaningful impacts.

She teaches several experiential courses in which students learn about the environmental aspects of life in cities and attempt to “green” operations in food service, recreation and campus life. Shaikh also teaches in the Calumet Quarter, an immersive quarter in which students and instructors explore the region encompassing Chicago’s Southeast Side and northwest Indiana through coursework and field trips.

By embracing the region as a local case study, the students are able to think critically about how ecology, human economic activity and public policy influence one another.

“In Chicago—or wherever you happen to be—getting outside of the classroom, observing what’s around you and using it as a subject of inquiry can add so much depth to your understanding,” Shaikh said. During non-pandemic times, she also co-leads the Mansueto Institute’s student research experience in the Galápagos Islands, which focuses on urbanization and sustainable development in the unique ecological context of the islands. 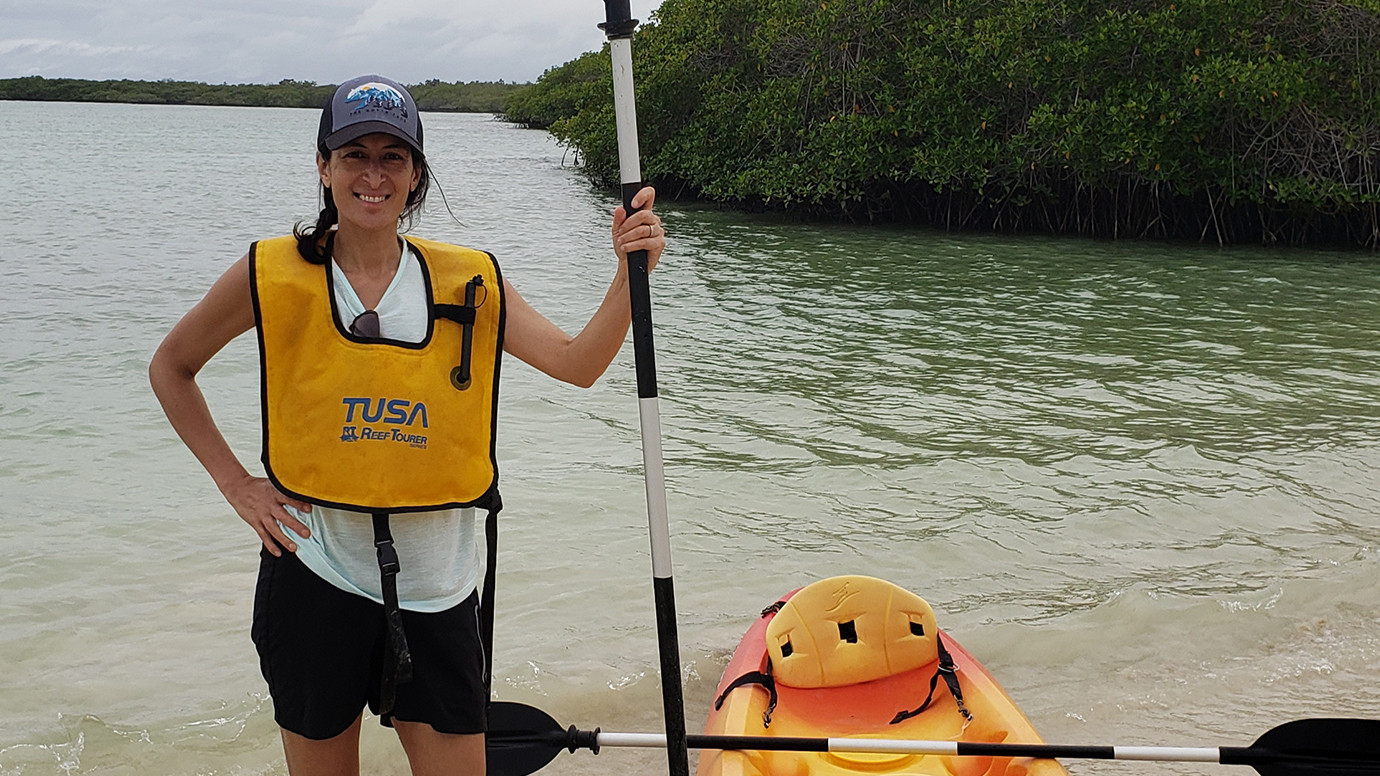 Sabina Shaikh kayaking in the Galápagos Islands, where she co-leads an annual student research experience during non-pandemic times. (Photo courtesy of Sabina Shaikh)

Like the Calumet Quarter course, the ongoing Chicago Studies Program incorporates the idea of experiential learning, facilitating collaborations between College students and Chicagoans, while the Environmental Frontiers initiative seeks to improve campus sustainability through analysis and recommendations led by students.

Though Shaikh’s courses have been remote over the past year, she has continued to teach in a way that fosters new connections between students and the environment, and new ways of thinking about our relationship to the natural world.

Last winter, she taught “Unnatural Disasters,” a course topic selected by students who wanted to study both climate change and disaster preparedness.

“In some ways,” Shaikh said, “the term ‘natural disaster’ has been used throughout history to absolve humans from the important role that they have to play in disasters—from prevention and mitigation to appropriate response.”

Disasters, she added, are often thought of as large-scale, uncontrollable events, but by acknowledging humans’ role in them, we can be more proactive in our response. “People are really the cause and the catalyst for environmental change,” Shaikh said.

As an economist and an environmental policy expert, Shaikh’s research is centered in Cambodia, where she is part of a multidisciplinary team funded by the Center for International Social Science Research and the Neubauer Collegium exploring how environmental changes affect rural livelihoods—and, in turn, human migration and urbanization.

Though her fieldwork has been paused due to the pandemic, she continues to challenge the narrative that humans must be in conflict with their environment. For Shaikh, a useful framework for thinking about our environment in an economic context is the concept of “ecosystem services.” These are the benefits that healthy ecosystems provide to humanity, like drinking water, crop pollination and erosion control. They aren’t typically factored into economic models, but are nonetheless vital to economic activity.

Without mountain glaciers, for example, many communities would lose water for drinking and irrigation. Without bees, our food supply would be imperiled. The good news, Shaikh said, is that people are becoming increasingly aware of the benefits of healthy environments and the costs of environmental degradation.

“The idea is still out there that economic growth is counter to environmental protection,” said Shaikh, whose research and consulting with local organizations also encompasses green infrastructure, including managing environmental conditions like flooding and heat in cities. “But really, as the new federal infrastructure plan makes clear, they’ve very connected and very synergistic—and social sciences are really critical to addressing environmental challenges.”

Shaikh also continues to be involved on a personal level. She’s celebrated Earth Day since she was an undergraduate student in Madison, when she sold reusable travel mugs on campus. This Earth Day, she has far more planned at UChicago. Programming includes pandemic-safe nature walks and virtual tours; dialogue sessions with undergraduates who analyzed how to reduce campus water and energy use; and two urban water focused events: a virtual tour of Chicago’s tunnel and reservoir system and a conversation on neighborhood equity.

“Over the past year, we’ve seen what massive behavior change can do for the environment: Pollution levels were so much lower, and highways were empty last spring,” Shaikh said. “But much of that has returned to the pre-pandemic status quo. Can we get back there without a crisis? That’s the question we’re now faced with.”

Shaikh’s hope is that some of the positive changes spurred by the pandemic will outlast its devastating effects. More biking and walking and fewer commutes by car would be good—but public policy that supports forward-thinking infrastructure would be even better. To get there, according to Shaikh, we’ll need a generation of young people working in multiple disciplines who not only feel connected to the environment, but see its value and are equipped to protect it.

Her strategy is a good start: Go outside—and use what you learn there to find solutions that work, for both people and the planet.

—This story first appeared on the UChicago News website. 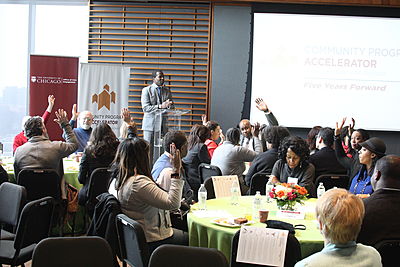 Metropolitan Universities: Civic Leadership Education at the University of Chicago