Timuel Black, AM’54, celebrated in memorial service at UChicago 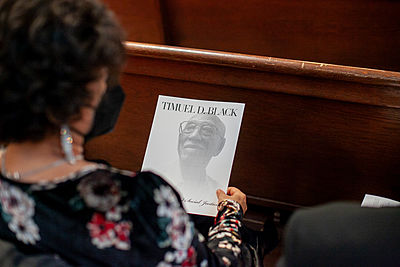 Held on Dec. 5, the public memorial service drew crowds to the University of Chicago’s Rockefeller Memorial Chapel—the same site where Martin Luther King Jr. delivered his first major Chicago address in 1956, thanks in part to Black’s efforts. Like King, Black, AM’54, devoted his life to peace and justice.

At one point during the service, cultural activist Lisa Yun Lee urged those paying their respects to embrace one of Black’s most important life lessons: “Tim taught us that the shortest distance between two people is a story.”

Fittingly, the three-hour service was packed with stories about Black, who died Oct. 13, and the outsized impact his life had on countless others in Chicago and nationwide. Opening with a traditional African ancestor salute with drumming and dance, the public service featured musical offerings and several notable speakers who described Black as “one of the nation’s preeminent storytellers,” “a moral gyroscope” and the embodiment of “Black excellence.”

To view the program for the memorial, click here.

In addition to Lee, who is executive director of the National Public Housing Museum, those who reflected on Black’s substantial contributions included Gov. J.B. Pritzker, Mayor Lori Lightfoot and Robert J. Zimmer, UChicago’s chancellor and president emeritus. Among the many others who addressed the crowd at Rockefeller Chapel were historian Julieanna Richardson, political strategist Don Rose and Juan Salgado, chancellor of the City Colleges of Chicago.

The memorial service was planned in partnership with the University of Chicago.

For Zimmer, Black was a friend and an essential community bridge-builder. He recounted the tours of Bronzeville that Black led each fall for groups of UChicago’s first-year College students, encouraging them to learn the city’s history and engage with the South Side.

“The University is deeply proud that Tim Black is our alumnus,” Zimmer said. “His ability to simultaneously focus on and integrate the lives of individuals with the history of communities and history—both its tragic and profoundly sad aspects, as well as its joyous and exuberant moments—with hopes and actions for the future is a reflection of a deeply talented mind and sophisticated thought. That was Tim Black.

In his remarks, Pritzker described how Black inspired the generations that followed him, and how the lives of everyday Chicagoans anchored his work: “He never lost sight of what he hoped this great city that he loved would someday become.”

“Most of us could only hope to witness a century on this Earth,” Pritzker said. “Timuel Black shaped his century.”

Born Dec. 7, 1918, in Birmingham, Alabama, Black moved to Chicago with his family in 1919, settling in the city’s “Black Belt,” now known as Bronzeville. He served in World War II and helped liberate the Buchenwald concentration camp. In 1963, Black helped organize the “freedom trains” that took thousands of Chicagoans to the March on Washington.

Lightfoot, who also spoke at a private funeral service for Black on Oct. 22 at First Unitarian Church of Chicago, expressed gratitude for Black paving the way for her as an African American leader. She also recalled some of Black’s favorite aphorisms—including one that his grandmother, a woman born into slavery, used to chide him when he was misbehaving as a child: “I can’t hear what you’re saying, because what you’re doing talks so loud.”

“Anyone who was close to him knew he never ever stopped organizing, advocating and spreading his spirit of optimism,” Lightfoot said. “Tim was a man of actions and not just of words, so let’s commit ourselves to making his an evergreen legacy by picking up the torch that Tim left for us. Let’s strive to walk in his footsteps, follow his example, and never cease fighting for justice, peace, equality and dignity for everyone.”

Black received a master’s degree from the University in 1954, having studied sociology and history under renowned scholar Allison Davis, UChicago’s first tenured African American professor. He went on to teach high school in Gary, Indiana and Chicago; interview hundreds of Chicago residents for his oral history, Bridges of Memory; author a memoir; and give tours and lectures about his life and career well into his late 90s.

In 2012, the University awarded Black the William Benton Medal for Distinguished Public Service, honoring him as “one of the most influential civil rights leaders in Chicago history” and “a national voice in the cause of American justice.”

Black’s commitment to and deep effect on the next generation of activists and lifelong learners was referenced repeatedly throughout the service. That effect was on full display when Brandon Walker, an eighth-grade student who interviewed Black in 2018 at the age of 9, took the podium and spoke of the lessons he cherishes from their conversation.

“Something I recall clearly is when Mr. Black spoke to me about it not being enough to advance just myself,” Walker said. “I have a duty to advance others who may not have my same advantages. He said, ‘The door is going to open. Be prepared to walk in, but keep the door open so others can come in too.”

Black—who spent years living in Hyde Park, Washington Park, and Bronzeville—made a lasting impact on the local community in many other tangible ways.

The University dedicated the Timuel D. Black Edible Arts Garden in his honor in 2009 through the Office of Civic Engagement’s Civic Knowledge Project, which Black worked with often. In 2014, Black worked with UChicago on the University-led proposal to bring the Obama Presidential Center to the South Side. In 2019, the University hosted a 100th birthday event for Black and last year, also through the Civic Knowledge Project, established the Timuel D. Black Community Solidarity Scholar Fund. The annual Solidarity Scholar award will be given to an outstanding University undergraduate or graduate student who exemplifies Black’s spirit.

The memorial service at also paid tribute to Black’s love of jazz, with musical selections reverberating from Rockefeller Chapel’s soaring walls. Shortly before a procession of jazz musicians concluded the service with a lively rendition of “When the Saints Go Marching In,” Black’s wife of nearly 40 years, Zenobia Johnson Black, addressed the crowd.

She thanked speakers and attendees for their support, and shared how much she knows Timuel would have enjoyed the celebration.

“Tim grew up secure in the knowledge that he was loved and his life mattered, that what he thought, how he behaved, and the decisions he made all mattered,” Johnson Black said. “At the end of his life, Tim was not afraid, he was not agitated or angry. He would say that he lived so much longer than most. He was grateful to still be here.”

She added that her late husband had faith that young people would come forward and continue his life’s work: “Where will the next Tim Black come from? They’re already here. Sitting in classrooms, standing on street corners, playing basketball, and we need to show them love. They need to know that they are loved and they need to know that their lives matter, that they can make a difference.”

Black is survived by Zenobia and his daughter Ermetra. He was preceded in death by his sons, Timuel Kerrigan Black and Anthony Said Johnson. 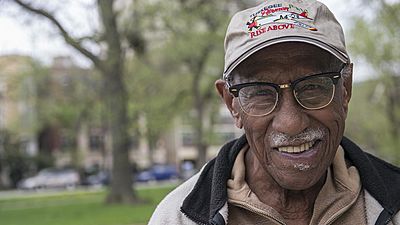 Timuel Black, AM’54, spent decades working as an activist and educator on Chicago’s South Side, impacting the lives of countless people.

Professor, historian, and University of Chicago alumnus Timuel Black, AM’54, was honored by the University for his lifelong, scholarly fight to improve the South Side and his decades of volunteerism, education, and activism.

The Day Dr. King Died: Timuel Black Reflects on End and Beginning of an Era

On Wednesday, April 4, the University of Chicago Civic Knowledge Project hosted “The Day Dr. King Died,” a conversation with civil rights activist and oral historian Dr. Timuel Black as part of a series of events for its Martin Luther King Initiative.