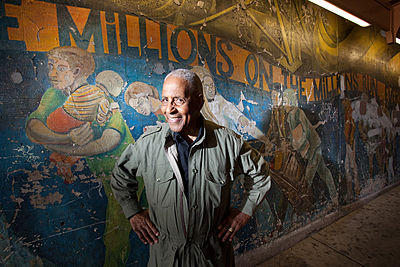 In remarks and recollections celebrating his life this week, former University of Chicago police chief and longtime community leader Rudy Nimocks, Sr. was remembered as a transformational leader, a trusted mentor, and a “dapper gentleman” with a gift for bridge building.

Nimocks, who died on March 16 at the age of 91, started at UChicago in 1989 as chief of the University Police Department, a position he held for nearly 20 years before he was named Director of Community Partnerships in the Office of Civic Engagement in 2009. Previously, he’d spent more than 30 years working his way up the ranks in the Chicago Police Department. There, he became the first African American Commander of the Homicide Section and the first African American Chief of the Organized Crime Division, among other critical positions.

Nimocks continued working with the University well into his 80s. By the time he retired in 2017, Nimocks had earned honors and accolades from the University’s Diversity Leadership Award and a spot in the Chicago Senior Citizen Hall of Fame to the 2012 dedication of the 6100 block of South Greenwood on the south edge of campus as “Rudy and Joyce Nimocks Way,” a tribute he shared with his wife of more than 50 years, Joyce.

Community and University leaders, friends, and family members shared memories of Nimocks during a funeral service held at Rockefeller Memorial Chapel on March 23. Though COVID-19 restrictions limited the number of people who could attend the service in person, others took part via an online livestream, posting heartfelt messages of gratitude for the positive impact Nimocks had on them and the community.

“Rudy was so special,” Derek Douglas, UChicago vice president of civic engagement and external affairs said. “I learned so much from him about the true meaning of community partnerships and the responsibility the University had to make a difference on the South Side. He was a mentor to me and so many others.” 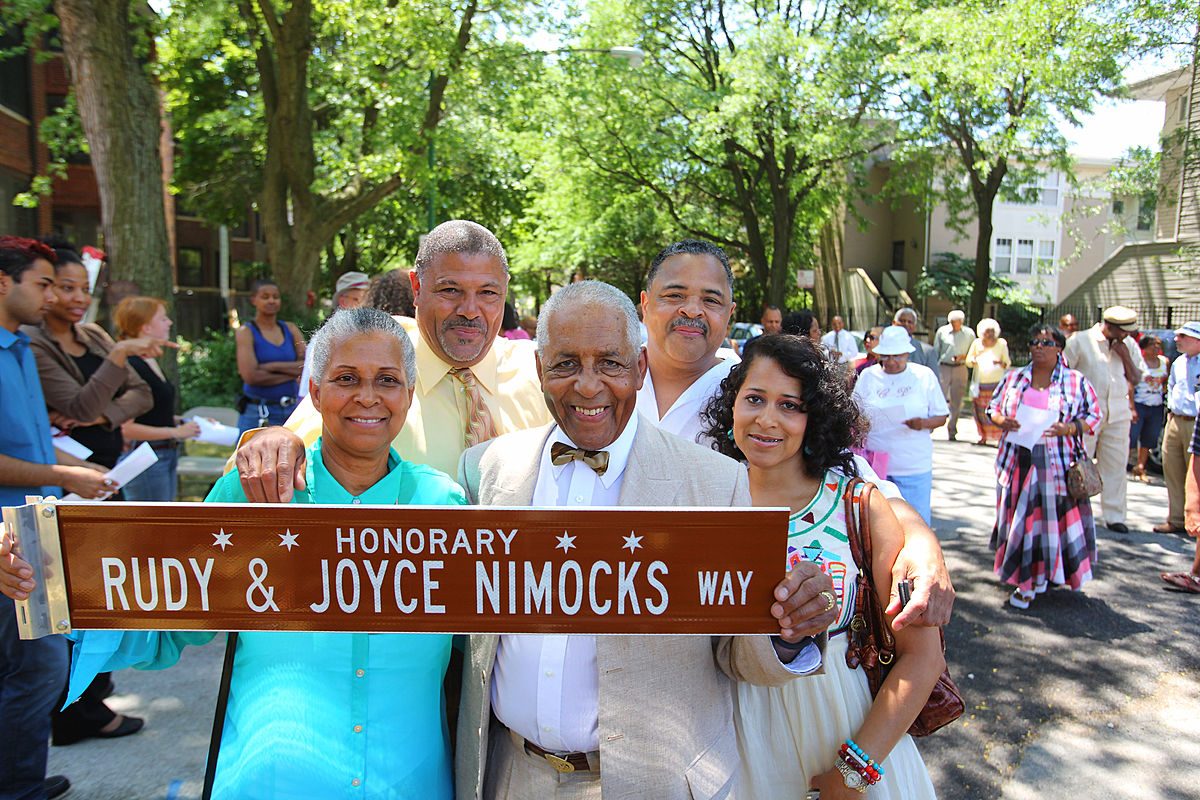 He was an exemplary colleague, a considerate friend, and an adventurous spirit, speakers said. He drove cross country on his motorcycle. He’d spent years in the United States Army and a short stint as a boxer. His rich knowledge of Chicago history was vast and friends treasured his colorful first-hand stories about everything from big name Chicago politicians and musicians to his years in uniform. Cook County Board President Toni Preckwinkle described Nimocks as a good man and a straight shooter. Ald. Leslie Hairston of Chicago’s 5th Ward spoke of the many community partnerships and programs he’d forged.

“Rudy was always focused on the wellbeing of others, specifically on the wellbeing of the communities that he served, and in particular the young people in these communities,” UChicago President Robert Zimmer told those gathered for and watching the funeral service. “He was always looking for the next step, the next important thing that could be done to make lasting change and to help the community. Change, of course, is not simple. I always greatly admired not only Rudy’s determination to help make significant change but his ability to carry it out.”

Among those changes, Nimocks led the effort to extend the University’s policing boundaries to 63rd Street in Woodlawn and areas north of campus in response to community concerns about public safety. He was also responsible for installing emergency phones in key locations around the community.

Those initiatives and others not only helped community members feel safer but also built a deeper sense of trust between the University community and its South Side neighbors, UChicago alumnus and civil rights activist Timuel D. Black says. Black, who turned 102 in December, first knew of Nimocks through Nimocks’ father, who was Black’s supervisor at the Chicago Metropolitan Mutual Assurance Company before and after World War II. He later got to know the younger Nimocks personally and through the work they did in the community.

“He was a not just protective physically but also spiritually,” Black remembers from when Nimocks extended the UCPD patrol boundaries. As a long-time Woodlawn resident, he bridged a divide, Black said, between University and community. “I was just proud to know and be associated with Rudy Nimocks.”

When Nimocks shifted his role from the University police department to what is now the Office of Civic Engagement, he also had an opportunity to carry on his longtime commitment to Chicago youth. From the time when Nimocks first joined the Chicago Police Department in the 1950s, working with young people and helping them address the issues that too often blocked their path to a brighter future was close to his heart. In 2009, for example, Nimocks was instrumental in the development and launch of the Chicago Youth Leadership Academy, a program that invited South Side teens to participate in three weeks of police-led exercise drills and educational and leadership workshops while staying in a campus residence hall. 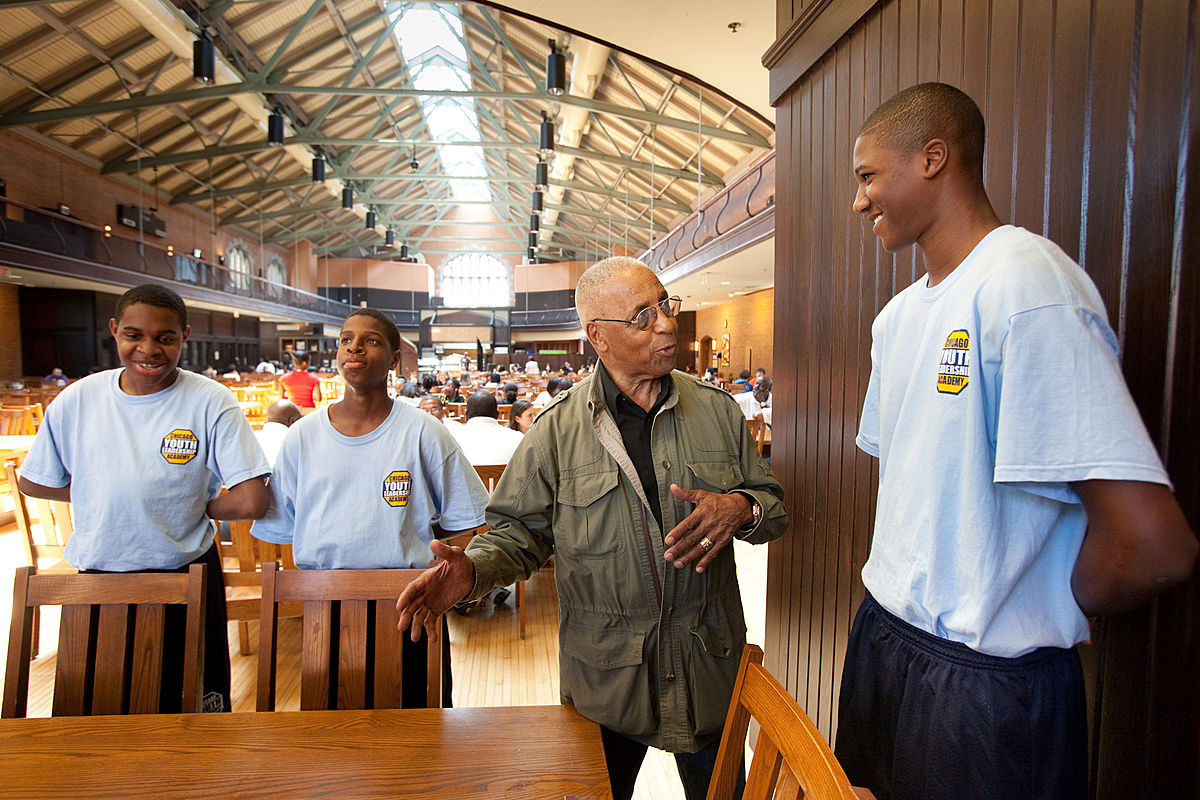 Sonya Malunda recounted the time Emmy-winning actor Charles Dutton happened to be on campus and noticed a cluster of uniformed Chicago Youth Leadership Academy participants on an outing in Hyde Park. When he inquired about the group, he was connected with Nimocks,  which ultimately resulted in Dutton bringing his one-man autobiographical play to the Reva and David Logan Center for the Arts to benefit the program. It was just one instance of Nimocks getting creative in his efforts to support local youth, Malunda says.

Another was his ongoing relationships with emerging leaders and other young people he mentored across a spectrum of backgrounds. The positive impacts those mentees have, in turn, had on the city and the world is notable, Malunda said.

Ryan Priester first encountered Nimocks as a UChicago undergraduate student when Nimocks offered encouraging words to Priester and fellow members of the Organization of Black Students. The two would later work closely on schools and public safety work when Priester was getting his start as a community organizer and when Priester returned to the University to lead the Community Programs Accelerator in the Office of Civic Engagement. Whenever a new professional opportunity arose for Priester in the twenty years after he first met Nimocks, he turned to his mentor for insight and guidance, Priester says.

“He was always thinking about ways to help young people get a sense of significance. That was one of Rudy’s big things — youth often got involved in gangs or other things because they lacked another way to access respect and significance and if you could find a way to funnel that energy into something that is generally seen as more socially productive then you would have a change in what the outcomes of the lives of those people would look like,” Priester said. “He was seriously dedicated to that work and knew each of the kids involved in those programs.”

Priester also credits Nimocks with encouraging him to be more thoughtful and collaborative when his approach to community issues was more contentious. Knowing Nimocks would listen meant a lot to him and many others who may have been skeptical of the police or University officials, Priester said.

“Everybody knew and trusted and respected Mr. Nimocks so people would stop and listen. He was that one voice across multiple generations. You felt like there was someone who cared about you and for a lot of us that fatherly, grandfatherly figure was super important,” Priester said. “He spent a lot of time with me and I’m a lot better for it as a person.”

For Priester and so many others, Nimocks was an inspiration, and his life-long commitment to his community, and the people in it, will reverberate for years to come.

After nearly three decades of service, former University of Chicago police chief and longtime community leader Rudy Nimocks will retire from UChicago at the end of January 2017.

The Chicago Youth Leadership Academy, which is held each summer on the University of Chicago campus, aims to end a cycle of issues that often plague families in high-risk neighborhoods by providing alternatives to gangs, drugs, and teen violence.