Quantum Leap: Pritzker School of Molecular Engineering researchers and South Side teachers team up to engage students in revolutionary technology 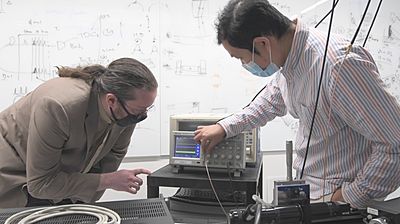 The quantum revolution is coming in nearly every industry, from information technology to medicine to manufacturing. In a pilot program originating at UChicago, quantum researchers at the Pritzker School of Molecular Engineering (PME) are helping South Side high school teachers introduce their students to quantum concepts, positioning them to be part of a quantum-ready workforce.

Adam Davenport’s natural enthusiasm ratchets up a few levels when he talks about quantum science, in which theories about the behavior of infinitesimally small subatomic particles upend the classical physics he learned while earning his undergraduate degree.

“Our brains have evolved to deal with stuff on a level we can see, not to deal with this tiny scale where all the rules we know go out the window,” he says. “Quantum concepts are counterintuitive, and this confuses everybody! That’s the challenge, and that’s what makes it fun.”

Davenport, a physics and chemistry teacher and chair of the science department at James H. Bowen High School in South Chicago, is one of four South Side high school teachers collaborating with UChicago quantum researchers to teach students quantum concepts early.

Quantum encryption, computing, and sensing are expected to have a broad impact on industry and the economy, potentially enabling everything from unhackable digital communications to more powerful, energy-efficient electronic devices to new ways of diagnosing and treating disease.

But while there’s a rapidly growing need for quantum-trained researchers and workers, the field is young and not yet part of most students’ pre-college learning.

“We’re making exponential progress toward real-world applications of the technology, but we have a huge gap in training students who will become the workforce for this industry,” says Tian Zhong, a quantum researcher and assistant professor at PME.

When high school students master the quantum basics that Davenport and Zhong both call “counterintuitive,” they’ll have an easier time with related material later. “Companies are realizing that they don’t have people in these fields because quantum isn’t part of schools’ curriculum — students may encounter bits and pieces in grad school, but that’s too late,” Zhong says.

“There’s a huge gap in our education pipeline, and given how fast the field is moving, we have to start solving it now.”

Zhong’s solution sprouted in 2019, when he had the idea for TeachQuantum, a program that immerses high school teachers in quantum research labs and prepares them to teach quantum-focused STEM concepts in their classrooms. The new program connects to a broader effort at UChicago to ensure South Side educators and students are equipped with the knowledge and skills to take part in the quantum revolution.

He developed the idea further as part of the National Science Foundation’s Quantum Leap Challenge Institute for Hybrid Quantum Architectures and Networks (HQAN), a UChicago partnership with the University of Wisconsin–Madison and led by the University of Illinois Urbana-Champaign (UIUC)— all three of which are key institutions in an emerging Midwestern “quantum corridor” like California’s Silicon Valley.

Participating teachers took part in a six-week summer research and mentoring experience in PME labs, developed new quantum-inspired activities to implement in their classrooms, and will meet quarterly throughout the school year to share their outcomes and best practices. They received a stipend for participating, plus funding to create teaching modules.

The TeachQuantum pilot launched in June of 2021. Working in Zhong’s lab and brainstorming with the other members of the cohort, Davenport built an engaging game that shows students how quantum encryption can transmit messages securely without danger of being hacked.

“Every kid wants to send secret messages, right?” he says. “When they do it in this game, I can say, ‘Hey, you just did quantum physics! Kudos to you!’ They can use simple cryptography outside the classroom, too, and the second you get them doing that, they’re hooked.”

Fostering diversity in the quantum workforce is another challenge, Zhong says, so the TeachQuantum pilot focused on teachers from South Side schools that serve mostly students of color in Kenwood, Woodlawn, Hyde Park, Englewood, and South Chicago. Davenport’s students at Bowen are 79% Black and 20% Latinx; 86% of them live in low-income households.

“The TeachQuantum initiative exemplifies the Pritzker School of Molecular Engineering’s commitment to educating the next generation of quantum engineers,” said Matthew Tirrell, dean of PME. “Through this program, we aim to increase interest in and exposure to not only quantum, but also STEM fields more broadly, and to introduce and welcome those traditionally underrepresented in the sciences to new and exciting educational and career opportunities.”

Davenport plans to test his cryptography game with thirty-five students in the second semester of this school year; he’s getting other Bowen departments into the act as well, encouraging the social studies team to teach World War II cryptography to deepen students’ understanding of the concept. And he and Zhong both envision TeachQuantum scaling up to develop a large set of learning modules that align with the Next Generation Science Standards, which have been adapted or adopted by 44 states, including Illinois.

According to Zhong, learning flowed in both directions during the TeachQuantum pilot. “I learned as much as the teachers did,” he says.

“I got a lesson in reality — in the issues that affect many students on the South Side. I also came to learn that many of our students in public schools struggle with STEM. I really appreciate how the teachers are showing me practical approaches to take with their students, how to break things down to their most elementary levels to make them engaging. For high school students, it’s a different approach than what we do at the University.”

Davenport says that without TeachQuantum, his students simply wouldn’t be learning quantum concepts. “I didn’t know about the industry need, and I didn’t know about Chicago being so uniquely placed geographically for this work and these opportunities.

“The program opened my eyes to the vital need for students to learn this, and learn it in a way that connects to their lives and things they already know. It’s the way industry is going to be driven from here on out, so even if they never pick up a quantum textbook, they’ll have this knowledge in their back pocket for the future.”

Following the successful PME pilot, TeachQuantum will now expand to include more South Side teachers at UChicago as well as new groups of teachers at UIUC and UW-Madison, where they’ll take part in immersive experiences in quantum labs and develop quantum-focused activities designed specifically for their students and schools. Teachers from this first cohort will serve as mentors to teachers in the next cohort. The program will focus on the needs and interests of local schools and teachers, who will be an essential part of the collaboration to build a network of quantum teaching resources throughout the region. 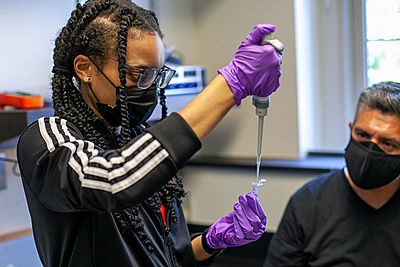 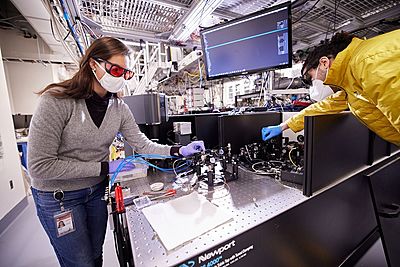 Researchers in the newly launched Open Quantum Initiative Undergraduate Fellowship will live and work at a Chicago Quantum Exchange member or partner institution, completing a research project in quantum information science and engineering under the guidance of a mentor. 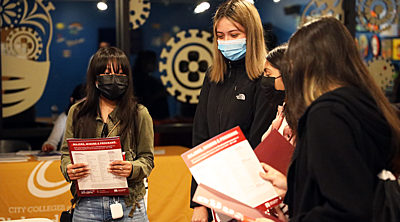 Pritzker School of Molecular Engineering hosted an event at the National Museum of Mexican Art drew students from across the city to participate in interactive STEM activities, networking opportunities, and informational sessions on college financial aid.