Panel brings educators together to share strategies for success 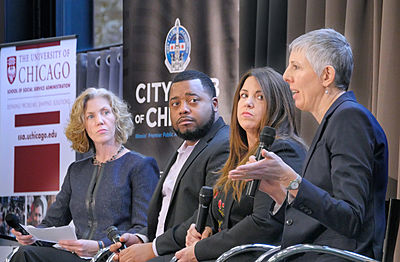 A group of educators, policymakers, and advocates convened at the University of Chicago Thursday to discuss ways to improve student outcomes and level the playing field in Chicago Public Schools.

The event, “A Moral Imperative: Educational Equity in Chicago Public Schools,” co-hosted by the City Club of Chicago and the University’s Office of Civic Engagement, brought together a panel of experts to discuss how the nation’s third-largest school system – once called “the worst in the nation” – has made unprecedented gains over the last dozen years.

In 2006, Sarah Duncan co-founded the Network for College Success (NCS) at the University of Chicago School of Social Service Administration.  She was joined on the panel by Dr. Maurice Swinney, CPS’s first Chief Equity Officer, and Dawn Ramos, Principal at Tilden Career Community Academy, as well as Beth Swanson, CEO of A Better Chicago, a fund dedicated to fighting poverty by creating opportunity for youth, as moderator.

While all the panelists noted they still have a way to go to make sure that the city’s schools work for everyone, they are proud of the turnaround. The numbers, they said, show what can happen when administrators and teachers collaborate with researchers and use their data to implement system changes.

Perhaps one of the most groundbreaking findings came from work that started in the late 1990’s, when researchers from the University’s Consortium on School Research discovered that being on track at the end of freshman year—failing no more than one semester of a core course and earning enough credits to move on to 10th grade—is a more reliable predictor of graduating high school than race, socioeconomic status, and prior achievement combined.

In 2007, the UChicago Consortium expanded on its seminal research and issued a new report identifying specific strategies for improving Freshman OnTrack rates. In response, CPS began providing every high school with bi-weekly Freshman OnTrack data reports and the University’s Network for College Success began providing training and resources to help CPS schools put the research and data into practice.

At that time, the on-track rate for CPS freshmen was just 61 percent. Today, that number is 89 percent. In the same period of time, the high school graduation rate increased nearly 20 percent.

Of course, data shouldn’t be viewed as one-size-fits-all, said Dr. Maurice Swinney who, as CPS’s first Chief Equity Officer, is responsible for identifying and eliminating disparities district-wide.  Educators also need to think about how it fits into a school’s particular culture.

“It’s not about intent, it’s about impact,” he said.

“This is our data and our responsibility to figure out what comes next.”

But she also noted that data should guide – not dictate – initiatives. That staff on the front lines need to understand and build relationships with the complex human beings that occupy their classrooms.

“We have to make sure they get what they need,” she said. “Just by showing up, they are showing us their resilience.”

It is also important that college admission should not be the only measure of success, Ramos said.  Unlocking equity also means having the tools for students who want to be an electrician or a carpenter.  “My goal is that everyone who leaves has a post-secondary plan in place.”

Duncan concluded the program by explaining that besides research and data analysis, the other component that helps make NCS unique – and effective – is a fresh approach.

“A lot of school reform is done to schools by people who are experts in something but may not understand the local context,” Duncan said.  “At NCS we asked ‘what if we make the people in the school the reform?’  So, we’re there to support school leaders as they build the teams and the trusting relationships and analyze the data so there's a mechanism in place to make reforms happen.  Those pieces working together are really powerful.”