A community organizer helping address issues such as gang violence and juvenile justice at age 13, Sheldon Smith was not the typical kid in Chicago’s Woodlawn neighborhood in the 1990s. Yet, the situation that led him to community organizing was very typical: He had an absent father.

“My father was in and out and I was hurting,” said Smith, who now runs a program for young fathers supported by the Community Programs Accelerator at the University of Chicago. “I used to get into a lot of fights, and it was because I didn’t have that male role model who was checking me for the things I was doing wrong. All of my friends had the same story; we grew up in single-parent homes without our fathers.”

Things began to change after youth development and advocacy organization Metropolitan Area Group for Igniting Civilization (MAGIC) opened an office in the building where Smith lived. The director, Joseph A. Strickland, AM‘02, observed Smith with older teens, recognized his leadership skills, and offered him a job.

“My male role models came from MAGIC; they were my mentors and father figures, along with my football coach,” recalls Smith.

At 21, Smith became a father himself and was determined to be a good one. He also wanted to help other young men. In 2010, he created the Dovetail Project. The 12-week nonprofit program teaches fathers aged 17 to 24 life skills, parenting skills and their rights as fathers and U.S. citizens. Participants receive a certificate of completion during a graduation ceremony, a $300 stipend, and paid GED enrollment, if needed. Since the program began, 230 fathers have completed it.

Smith’s vision and the Dovetail Project’s early success led UChicago to select the organization as one of the first participants in its Community Programs Accelerator in 2014. The accelerator, which supports community-based nonprofits serving mid-South Side neighborhoods, provided the organization with grant funding, along with access to other University resources such as work and meeting space, technical assistance from professional partners, dedicated graduate student workers and guidance from staff and faculty members.

“The Dovetail Project works with an in-risk population of young men that most organizations either avoid or do not effectively reach,” said Shannon Moorer, the accelerator’s program manager. “They have a clear, straightforward program model that connects participation to outcomes and centers overall engagement around parental responsibility.”

“I’m looking to make this country better for fathers in urban areas, especially for African Americans and Latinos,” said Smith. “You need to have a healthy father for a healthy kid, and there was no targeted support within the fatherhood sector for young fathers.”

Waldo E. Johnson, Jr., associate professor at the University of Chicago School of Social Service Administration and a nationally recognized expert on African American fatherhood and masculinity, agrees. “Fathers provide paternal nurturance that’s equally as important for kids as the maternal nurturing,” Johnson said. “Focusing on the financial support as the sole or most important contribution for a father to provide to his child diminishes his capacity to provide emotional child care and other non-financial support.”

Johnson is assisting Smith in developing methods to evaluate the program’s effectiveness and determining how to expand its curriculum to address young fathers in other communities.

"Family and parenthood are usually only associated with mothers. The CNN Award and the partnership with the University of Chicago have helped nread down some of those barriers." - Sheldon Smith, Executive Director of The Dovetail Project

Program participants say they have experienced a difference. Earnest Hale was a 21-year-old new father when he started with Dovetail in 2013. “It was a really hard time for me. I was moving between houses, I had no job, and my baby’s mother had a minimum wage job,” he said.

Hale said he came out of the program with valuable lessons about navigating through life and parenthood. “I learned how to take responsibility,” said Hale, now 24 and a nursing assistant at the University of Chicago Hospital. His son is three.

Jonathan Johnson, who was Smith’s schoolmate at Chicago Vocational High School, became a father at 17 and joined the first Dovetail class. “I had a child on the way and I didn’t know what to do to prepare,” he recalled. “I loved the brotherhood and just having a place to go to do positive stuff.”

Johnson is now 24 and lives in Wisconsin with his son, 6, and daughter, 1. He travels back to Chicago on the weekends to recruit new Dovetail participants. He credits Smith and the program with pushing him to complete high school and work to build a strong future for himself and his children. He recently applied for an LLC to open a jerk chicken franchise in Wisconsin. News of the Dovetail Project’s impact is spreading. Last December, Chicago Mayor Rahm Emanuel selected Smith, now 26 years old, to serve on the city’s My Brother’s Keeper cabinet. In March, CNN named him one of its 25 Heroes of the Year. In September, CNN will select 10 of the honorees to go on to a next round. If Smith is selected, the public will have a chance to vote for him to be the 2016 Hero of the Year. So far, Smith is the only CNN Hero from Chicago this year.

“I didn’t start the project for recognition. I did it to fill a need,” said Smith, who graduated from high school with a carpentry certification and attended Chicago Community Colleges intending to complete a civil engineering degree. “I look at the CNN award as part of a divine plan. God has shown me that this is my work, and I’m going to dedicate my life to it.”

"As one of Chicago Beyond's initial community investments, The Dovetail Project will receive nearly $1 million to scale up its program and build an evaluation model with UChicago Urban Labs." - Shaz Rasul, Director, Community Programs, UChicago Office of Civic Engagement

This fall, Smith plans to expand the Dovetail Project to three locations: Woodlawn, North Lawndale, and Roseland, increasing the number of young fathers the organization serves from 60 per year to 120.

While response to the program has been encouraging, a big challenge is funding.

“Creating the program wasn’t hard. Recruiting young men was not hard,” he said. “The toughest part is funding because fatherhood programs are not widely funded within the broader social service and philanthropic communities. Family and parenthood are usually only associated with mothers,” he explained. “The CNN award and the partnership with the University of Chicago have helped break down some of those barriers.”

On June 16, Smith will oversee Dovetail’s 13th graduation ceremony. It will be held at the University of Chicago in the atrium of the Gordon Center for Integrative Science.

“It’s exciting to see the growth in the dads,” he said. “I created Dovetail to heal the brokenness and so that children won’t grow up hurting the way that I did. This is about breaking the cycle.” 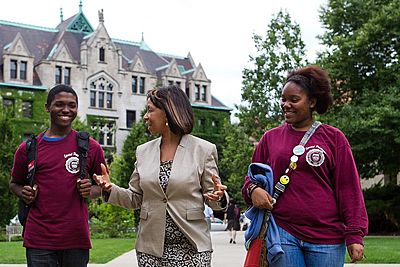 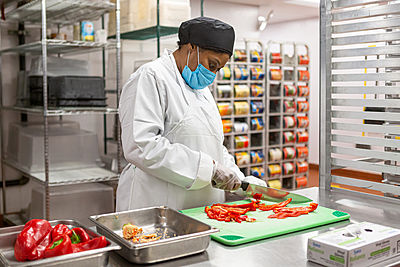 UChicago partners with South Side caterers to provide 50,000 additional free meals to the community

University of Chicago will partner with locally-owned South Side caterers to provide 50,000 free meals over seven weeks to local residents, as well as provide additional assistance to small businesses and nonprofits navigating a landscape shaped by the ongoing pandemic and protests for racial justice. 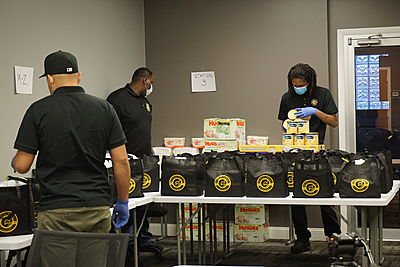 University of Chicago Awards $400,000 in Emergency COVID-19 Bridge Grants to 79 South Side Nonprofits

79 COVID-impacted South Side nonprofits will receive grant funding from the University of Chicago to help address their immediate needs and continue their vital programming.