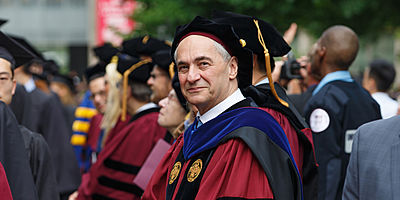 When Robert J. Zimmer became president of the University of Chicago in 2006, he came to the Board of Trustees with a set of priorities and one overriding message: A great university is never good enough. Complacency is enemy number one.

For all its achievements, the University could not rest on its laurels—or its laureates. It had to keep moving ahead. “We had to be ambitious,” he says, “and we had to take a more outward look at how we interact with and affect the world at large, whether that involves scholarship, societal issues, policy, science and its impact, or the nature of the students that we’re able to attract.”

Doing well after surgery last spring to remove a malignant brain tumor, Zimmer is now preparing to transition to the role of chancellor on September 1, when Paul Alivisatos, AB’81, currently provost of the University of California, Berkeley, is set to assume the presidency.

That the University has become more engaged with the world during Zimmer’s 15 years as president is beyond question. The College has become more accessible to students from a wide range of backgrounds, the Pritzker School of Molecular Engineering has brought applied science to campus in a big way, and the University has strengthened its ties to the South Side and around the globe. For a school known for its excellence in theory, these are decidedly practical achievements.

Nevertheless, if Zimmer has positioned the University to face more outward, he has done so by looking inward to its own principles and history. Indeed, he has staked his leadership on a commitment to the University’s abiding values—most prominently, freedom of expression. Already in his 2006 inaugural convocation address, he said that his “core responsibility” was “to ensure that the University realizes its enduring values and fundamental principles in the most powerful and lasting way possible.”

Zimmer says that one of his proudest achievements as president is bringing molecular engineering to campus. As he is quick to point out, however, “there’s very little one can do all by oneself.”

“When Bob left to be provost at Brown, I told him that I hoped we would one day see him back at the University of Chicago,” says University trustee Tom J. Pritzker, MBA’76, JD’76. That was in 2002. When Zimmer returned to become the University’s 13th president, Pritzker says, they met at a cocktail party where they first discussed Zimmer’s idea for bringing a novel kind of engineering to the University. “That chance meeting led the two of us to partner on a wonderful decade-long journey.”

“The creation of PME was the work of a broad community of people,” Pritzker says, “but from my side, at the core of our effort was Bob’s friendship and inspiration.”

University of Chicago faculty, Zimmer notes, were at the heart of the work to establish the school from the start. “We had a faculty committee chaired by [Carl William Eisendrath Distinguished Service Professor] Steven Sibener from the chemistry department,” Zimmer says, “and the committee put together an exceedingly thoughtful and well-argued plan.”

Thomas F. Rosenbaum, who was a UChicago physics faculty member and vice president for research and for Argonne National Laboratory before becoming provost under Zimmer, says that planning an engineering program from scratch allowed the committee to follow the most promising science rather than being “hidebound” by existing structures.

Critical to the PME effort was Zimmer’s hiring of chemical engineer Matthew Tirrell as founding director (now dean), much as recruiting data scientist Michael Franklin, the Liew Family Chair of Computer Science, was key to increasing that department’s capacity for connecting to applied science.

“Building a team of people in a purposeful way is exceedingly important for getting anything done,” Zimmer says. “It’s not as if I didn’t know that beforehand, but being president of a pretty sizable and complex institution, one feels it and experiences that every day. It’s not just a matter of some abstract knowledge.”

Making a priority of bringing in excellent talent is something Zimmer says he learned about early on in his administrative career from Stuart Rice, now the Frank P. Hixon Distinguished Service Professor Emeritus in the Department of Chemistry. When Zimmer was a department chair at the University in the early 1990s, he went to Rice, then dean of the Physical Sciences Division, for help recruiting an exceptional new hire: “I said I needed X, Y, and Z in order to recruit this guy.” According to Zimmer, Rice immediately got on the phone, called the provost, asked for the resources, turned back to him, and gave him the OK. “I still remember it vividly,” Zimmer says. Rice’s “ambition, values, and commitment to excellence were so clear.”

Mathematics was not Zimmer’s first career aspiration. As a young man, he wanted to become a physician like his father—until he had to dissect a frog in high school, which helped convince him to switch his attention to chemistry and physics. As a physics major at Brandeis University, he jokes, “I had a great magic touch,” claiming that no machine in the lab would work if he got near it. He knew that his strengths lay elsewhere. “So, I left the physics lab and walked over to the mathematics department.”

Zimmer’s research into ergodic theory, Lie groups, and differential geometry resists quick summary, especially for those not versed in the statistical properties of dynamical systems or the study of symmetries. Let it simply be noted that, starting from his Harvard PhD thesis, Zimmer’s work has been recognized as highly original—inaugurating an entire area of study called the Zimmer program—because of how it integrates seemingly disparate fields.

This integrative tendency is a deep part of Zimmer’s style of thinking, finding application well beyond the abstract realm of mathematics. “It’s affected how I think about the University in multiple ways,” he says.

As examples, he mentions the increase in professional school faculty teaching in the College, the incorporation of “institutional” programs into academic ones (e.g., the Urban Education Institute’s move into the Crown Family School of Social Work, Policy, and Practice), and a greater emphasis on public impact.

Similarly, arts programming at the University during Zimmer’s tenure didn’t just grow—it grew in ways that complemented and enriched what was already in place. “We’ve always had spectacular programs in musicology and art history,” he says, acknowledging the University’s established prowess in arts scholarship. What was less developed, and what he has helped to expand, was public performance, production, and exhibition. Strength in theory is a value in itself, and it provides a firm basis for closing the loop between theory and practice.

Alongside a greater emphasis on practice, UChicago Arts today pursues more, and more robust, connections with the University’s neighbors on the South Side. Under Zimmer, the Office of Civic Engagement has done the same, expanding programs and partnerships with the surrounding community and the whole city. “He has been our biggest vocal champion for the work we do,” says vice president for civic engagement Derek R. B. Douglas, whose office has distributed hundreds of thousands of free meals among other forms of assistance on the South Side since the beginning of the COVID-19 pandemic—on top of its existing work building partnerships with small businesses and community organizations and providing residents with greater access to education and employment.

Douglas says this work “takes on a different level of weight and importance” when the president visibly makes it a priority as Zimmer has. “Not since William Rainey Harper,” Douglas says, has a UChicago president so clearly stressed the University’s purpose and responsibility, “not just from within, but also beyond the walls of the institution.”