In 2014, Constance Jones, a Harvard Business School graduate and then newcomer to Chicago, was struggling to make connections within the city. Jones then joined the first cohort of the IMPACT Leadership Development Program, an initiative launched by the Chicago Urban League in partnership with the University of Chicago Booth School of Business – the first program of its kind specifically for African American professionals.

While in the program, she took a new job as Noble Network of Charter Schools chief external affairs officer and later rose to become CEO in 2018. She credits IMPACT as a transformational part of that journey. “I went from knowing no one in the city to being one of those people who people want to know, which was so weird to me,” Jones reflected. “IMPACT was very important in helping me get that network and understand the communities and deepen my relationships with communities here in Chicago.”

The IMPACT Leadership Development Program was first envisioned by Andrea Zopp in 2012 when she was president and CEO of the Chicago Urban League.  “I wanted to give young African American leaders a network of like-experienced people from different backgrounds that they could call on for support, and I wanted to give them the skills to be better leaders,” said Zopp.

Zopp brought the idea for the program to Derek Douglas, who had joined UChicago that same year as vice president for civic engagement and external affairs. From there, Douglas brought the University of Chicago’s Booth School of Business on board as an educational partner. Booth professor George Wu helped develop a curriculum for the program that combines civic education topics including African American history and politics in Chicago and their effect on current issues, with practical leadership skills, such as negotiations, decision-making, business ethics, and interpersonal dynamics.

“We do the kinds of things that are hallmarks of the University: help fellows think more clearly about challenges that exist in Chicago, and think critically about solutions,” Wu said. “And we’re also helping to network a bunch of really talented people in different sectors and industries. They come together, they trust each other, and they inspire each other to do bigger and better things.”

The Chicago Urban League is seeing firsthand the ripple effects of the program through its participants’ achievements. “Six years in, it’s clear that the program is working and that our fellows grow tremendously as a result of their participation in it,” said Urban League’s Mavis Laing, vice president and executive director of IMPACT. “Scores of people have been promoted, and scores of people are joining community boards.”

The partnership with Booth, said Laing, “has been extraordinary. We really see it as a wonderful demonstration of how a world-class educational organization can partner with a community-based organization and achieve tangible outcomes from it. Not only do we get a great deal of value from the pro bono space and teaching Booth provides, but the Booth brand attracts highly qualified people to our program.”

UChicago’s Derek Douglas sees partnerships like IMPACT as a critical part of the University’s role within the city. “To me, a city, a community is only going to go as far as the talent and the capacity of the people leading it. Programs like these are one of the best investments that any city could have, and one of the best things that the university could be doing, because it flows directly out of what we do naturally—which is to teach.”

With support from Booth alumni mentors, students at a Near West Side high school are launching successful entrepreneurial ventures.

“The goal is to help the young minds of today build businesses of tomorrow,” said Bart Marchant, who teaches the Entrepreneurship class. “It gives students a chance to take risks, fail, and continue to pick themselves up. Along the way, they learn important life lessons.” 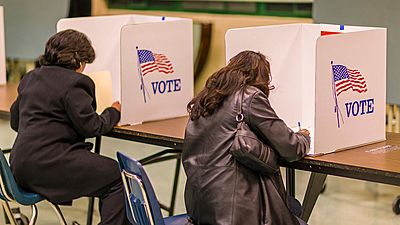 The COVID-19 pandemic has created a shortage of poll workers, many of whom are older and face increased health risks. Poll Hero, co-founded by a UChicago alum, tries to solve this problem with the enthusiasm and passion of Gen Z. 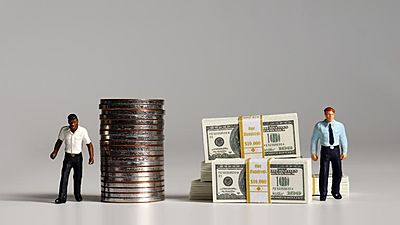 A recent paper by University of Chicago economists shows that income shocks—sudden but temporary reductions in income—affect Black and Hispanic households more strongly than their white counterparts, as a result of the persistent racial and ethnic wealth gap in the United States.