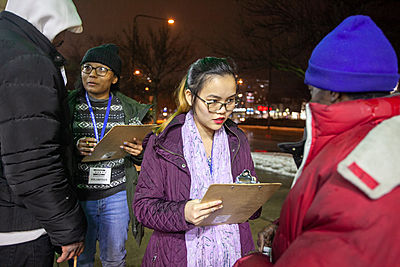 In the early hours of the morning, long before daybreak, hundreds of volunteers organized into small teams roamed Chicago’s streets looking for people experiencing homelessness. Some of those who braved the freezing temperatures were from the University of Chicago, which has supported the city’s annual Point-In-Time Homeless Count for the past six years.

“We have this goal to engage students with diverse voices and to expose them to interesting vantage points on the city with an emphasis on reciprocal, participatory community-engaged research,” said Chris Skrable, Director of Chicago Studies & Experiential Learning in the College. “It’s not merely studying about the city, but learning from and with the city.”

This year, 48 UChicago students, faculty, and staff signed up to work from 8pm on Thursday, January 23 until 3am Friday morning. At times the University of Chicago has been the single largest source of volunteers for the Count, a broad collaboration between the Chicago Department of Family and Support Services and many citywide organizations. Getting baseline data on the local homeless community demonstrates need; it is the basis for federal funding for services, enables resource planning, and raises awareness.

The recruitment effort, led by Chicago Studies (CS) and the Office of Civic Engagement (OCE), linked students with four South Side community partners: Featherfist, Thresholds South West, A Safe Haven, and Olive Branch Mission. These nonprofits provided training and insights garnered from years of frontline assistance. Teams were a mix of students, staff from social service organizations and volunteers from across the city, including persons who have previously experienced homelessness. Volunteers drive the entire area of the city block-by-block, interviewing persons they encounter who are experiencing homelessness while learning from one another along the way.

More than just boots-on-the-ground, UChicago students brought (and gained) new perspectives. “As a practitioner you sometimes need fresh eyes, fresh thinking, and outside-the-box ideas,” said Steven Saunders, a senior case manager who has worked at Featherfist for 25 years. “Some things I may have missed because I would carry on the way I always have. But the University of Chicago students bring ways to see, think, and react differently.”

He recalled one student who, after volunteering a few years in a row, saw and recognized a homeless person who Saunders didn’t remember. The man recognized the student, too, and became comfortable talking about services that could help him transition off the street, whereas previously he had declined.

“This person felt comfortable talking to the student. When they recognize you, they’re more willing to engage,” said Saunders. “That’s a heckuva way to know you’re making an impact on the streets at two o’clock in the morning.”

Fourth year Adrianna Barnett, who participated in the Count for the second time this year, was jarred by the sheer number of people they found sleeping at the police station for warmth. In conversation with them, she learned that many were experiencing homelessness for the first time. After many years of living paycheck to paycheck, a sudden financial hardship made it impossible for them to afford a home anymore.

“Homeless populations are notoriously undercounted, underrepresented, and misunderstood,” she said. “Student involvement in the Count is important because we experience such incredible privilege, and we should give back to the broader community that’s given us so much in the time we live here.”

Chicago Studies, an initiative of the College in collaboration with on- and off-campus partners, offers curricular and co-curricular opportunities to discover, study, engage with, and positively impact Chicago’s diverse communities. Its offerings include an interdisciplinary Certificate for students in the College, which requires a minimum of three Chicago-focused courses, 200 or more hours of direct engagement with the city, and a capstone project. The program’s ethos of collaborative and mutually beneficial participation includes a commitment to helping students see how their hands-on experiences can inflect how they think about issues affecting the city.

In the coming months, CS will partner with UCSC and the Chicago Coalition on Homelessness to do a lecture on campus, including speakers who have previously experienced homelessness. This spring, CS will also devote a session of its Research Roundtable series to the study of homelessness, led by faculty and academic institutes whose research and writing explore the issue from different disciplines.

Skrable noted that many students have participated in the Count for multiple years, and often come back to help after they graduate. Barnett understands why. “Getting out of Hyde Park and listening to a diverse set of voices is always a good thing,” she said. “Having in-depth conversations with, and learning from, people who are different from you and who you wouldn’t normally get to hear is good for the soul.”