A summer of sequels: Midweek on the Midway begins July 10

The University of Chicago Office of Civic Engagement has been hosting the popular Midweek on the Midway for more than a decade. The 2019 summer movie series kicks off July 10.

Movies will begin after sunset every Wednesday night from July 10 to August 7. Before each screening, starting at 7 p.m., there will be a youth-oriented activity led by a campus or community partner.

This summer, the series will open with Ralph Breaks the Internet, the hit video-game adventure film and sequel to Disney’s Wreck-It Ralph and wrap up with Mary Poppins Returns, the musical tale of the magical nanny’s return to the Banks family.

Moviegoers are encouraged to share their Midweek on the Midway experiences by tagging their photos with @UChiEngagement and #midweekmidway in their photos. 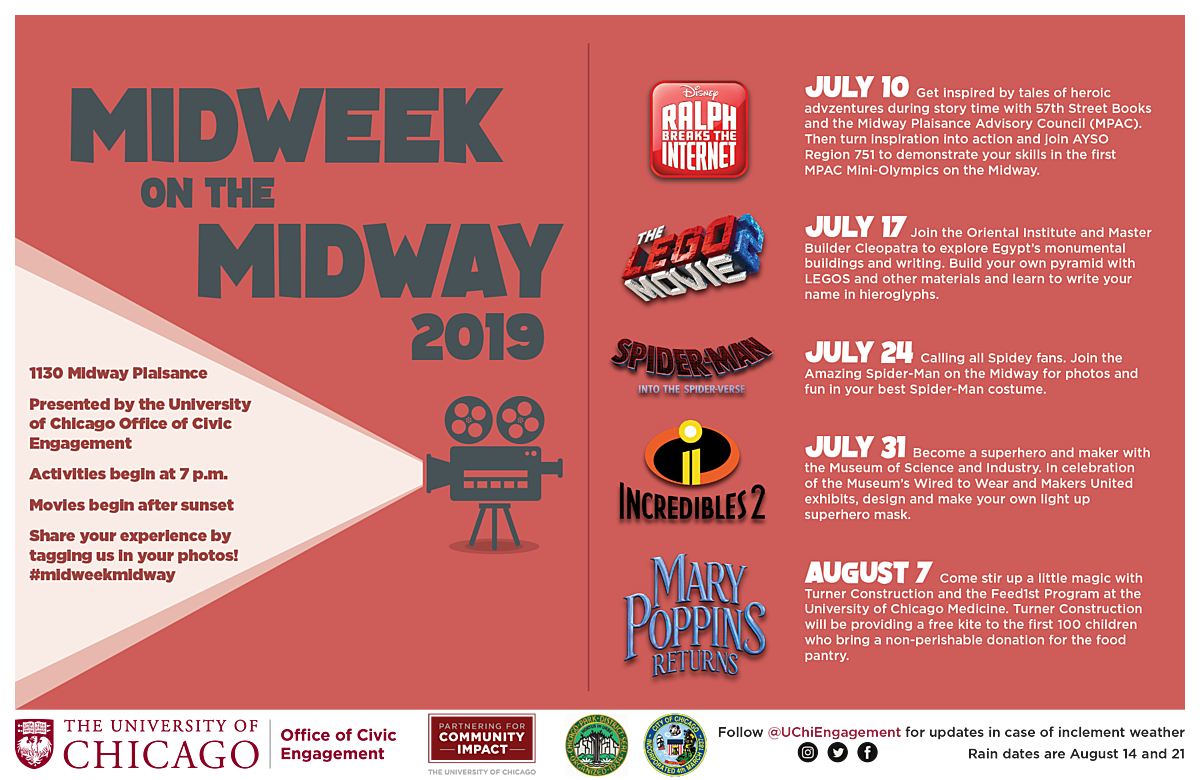 July 10 | Ralph Breaks the Internet
Get inspired by tales of heroic adventures during story time with 57th Street Books and the Midway Plaisance Advisory Council (MPAC). Then turn inspiration into action and join AYSO Region 751 to demonstrate your skills in the first MPAC Mini-Olympics on the Midway.

July 17 | The LEGO Movie 2: The Second Part
Join the Oriental Institute and Master Builder Cleopatra to explore Egypt’s monumental buildings and writing. Build your own pyramid with LEGOS and other materials and learn to write your name in hieroglyphs.

July 24 | Spider-Man: Into the Spider-Verse
Calling all Spidey fans. Join the Amazing Spider-Man on the Midway for photos and fun in your best Spider-Man costume.

July 31 | Incredibles 2
Become a superhero and maker with the Museum of Science and Industry. In celebration of the Museum’s Wired to Wear and Makers United exhibits, design and make your own light up superhero mask.

August 7 | Mary Poppins Returns
Come stir up a little magic with Turner Construction and the Feed1st Program at the University of Chicago Medicine. Turner Construction will be providing a free kite to the first 100 children who bring a non-perishable donation for the food pantry. Cash donations will also be accepted.

Follow @UChiEngagement for updates in case of inclement weather. Rain dates are August 14 and 21.