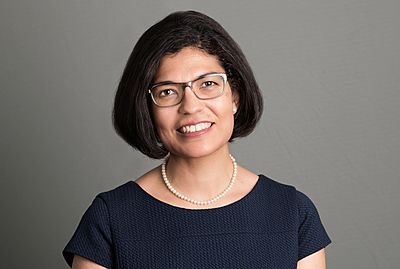 Susana is responsible for supporting new initiatives and advancing community and civic engagement strategies that strengthen the University’s impact on the city and the South Side.

Susana has more than 25 years of experience working in the areas of community development, civic engagement, and philanthropy in Chicago. She joined the University of Chicago as associate vice president in the Office of Civic Engagement in September of 2017. She is responsible for supporting new initiatives and advancing community and civic engagement strategies that strengthen the University’s impact on the city and the South Side.

Susana previously served as vice president for strategic partnerships at IFF, a regional community development institution, where she developed program strategies to build nonprofit capacity and identified capital and grant opportunities to advance IFF’s mission. Prior to joining IFF, she served as executive director of the Chicago office of Local Initiatives Support Corporation (LISC). During her 12-year tenure at LISC, Susana helped to raise $100 million in grant and loan commitments from private and public sources and developed innovative programs to advance neighborhood development, civic technology, health, and education efforts across the city of Chicago.

Prior to LISC, Susana worked for The Resurrection Project, a community development organization, and the Metropolitan Tenants Organization. She serves on the boards of directors for SkyARTS and the Leadership Council of the Civic Consulting Alliance. She has also served on the Community Advisory Council of the University of Chicago Medicine and the boards of directors for the Chicago Foundation for Women and ChangeLab Solutions. Susana has provided community engagement training to a range of institutions, including Studio Gang, the Art Institute of Chicago, Cook County State’s Attorney’s Office, and Presence Health.

Susana earned a master's degree in public administration from Harvard University's Kennedy School of Government. She has a bachelor’s degree in history from the University of Illinois at Urbana-Champaign.